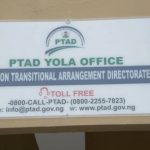 The Pension Transitional Arrangement Directorate, (PTAD), has opened North-East zonal office, in Yola the Adamawa state capital, to bring its service closer to pensioners in the region.

The PTAD Zonal Office is situated in the Federal Secretariat Complex, Jimeta-Yola.

In his remarks, the Executive Governor of Adamawa State, Mohammed Umaru Jibrilla Bindow represented by the Head of Service, Dr Edgar Sunday, commended the Executive Secretary, Sharon Ikeazor and her team for bringing pension services closer to the pensioners.

He further assured her of Governor Bindow’s continued support to PTAD to ensure hitch-free services to pensioners in the region.

The Executive Secretary, Sharon Ikeazor in her address during the commissioning said “Our mission is to provide world class pension services to our senior citizens, and I assure you that the Buhari led Administration is determined and dedicated to achieving this mandate. It goes without saying, that for Nigeria to succeed, we have to change the way we treat our senior citizens. This administration has given the utmost priority to the concerns of our Pensioners and PTAD has received magnanimous support from the Buhari led administration.”

She further added “You may recall that I pledged to open a befitting office here in Adamawa State when I paid His Excellency the Executive Governor Jibrilla Bindow a visit on the 29th of November 2016. It is with pleasure that I say the promise we made is now a reality with the Commissioning of Yola Office. It would however be worthy to note that this is more than an infrastructure, it is a symbol of hope, a way of bringing our services closer to our pensioners, we have also deployed experienced hands to efficiently kick start the office so that all complaints and enquiries can be resolved within the shortest possible time. Also pensioners can be verified in this office without travelling all the way to our headquarters in Abuja.

I would like to use this opportunity to thank H.E Executive Governor of Adamawa State, Our Royal Fathers for their individual commitment to the welfare of the senior citizens, NASS Committees on Establishment and Pension and other National Assembly members. I would also like to thank the Pension Union for their continuous collaboration with the Directorate.”

The Executive Secretary assured pensioners that PTAD officers would strictly adhere to zero tolerance to corruption, “as no staff of the directorate, would ask for money to process your pension payments.”

The President, Nigerian Union of Pensioners (NUP), represented by Mr Actor Zal commended the Federal Government’s support to PTAD, aimed at addressing pensioners’ plight in the country and the opening of the Regional office in Yola. He however appealed to state governors to cooperate with PTAD towards, resolving pension related issues, while assuring total support of its members to the directorate.

This brings the total number of PTAD State offices across the country to 8.