The Ag. Director General/Executive Secretary of the Pension Transitional Arrangement Directorate (PTAD), Murtala M.O., has cautioned pensioners on the activities of fraudsters who contact pensioners claiming to facilitate the payment of their pensions for a fee. 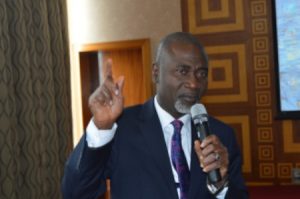 Speaking at the First National Retreat on Pension Administration in Nigeria, organized by the Senate Committee on Establishment and Public Service in July, 2016, the Ag. DG reaffirmed PTAD’s commitment to resolving pensioner complains at no cost to the pensioner.

“Pensioners should not fall prey to these dubious characters,” he said.

The Ag. DG revealed that the agency has ensured the smooth management of pensions under the Defined benefits Scheme (DBS) with innovations towards improving pensioners’ welfare  and establishing free communication flow between PTAD and the pensioners.

“Since we took over the administration of pensions under the Defined Benefit Scheme about two years ago, PTAD has worked hard to make life better for pensioners,” he said.

According to him, PTAD has recorded a number of achievements, highlighting the role of technology and the agency’s robust complaints management.

“Under PTAD, monthly pension payments are regular and prompt. Payments are processed electronically by the 24th of every month, subject to availability of funds, on the governments payment platform GIFMIS with no room for manual intervention.”

He added that “over 4,000 genuine pensioners” who were unjustly removed from the payroll before the establishment of PTAD have been reinstated.

“We have payrolled and brought huge relief to pensioners who had never received a pension for upwards of 10 years.”

He added that the agency has, through the on-going database clean-up and verification process, removed 15,000 bogus names from the payroll and has transferred the savings from these 15,000 non-existent pensioners to pay genuine pensioners with outstanding payments.

“The database clean-up process also ensures that, pensioners who were not receiving their pensions hitherto now have hope of receiving their entitlement as every kobo of savings is ploughed back into the system. 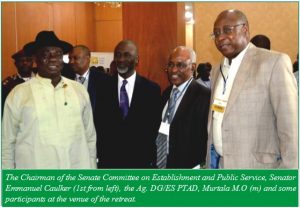 The Ag. DG also noted that PTAD has blocked the loop holes in the pension system by deploying modern technology in pension computation and payment.

“PTAD has consolidated pensioner’s database which contains information on all pensioners on the payroll. We are cleaning and gathering accurate data on pensioners that will help eliminate the incidence of ghost pensioners and duplications. The database will also allow seamless update and linking of pensioners Next -Of -Kin, supports the prompt payment of benefits, as well as speed up complaints resolution.”

He further noted that PTAD’s successes have been aided by the open door policy of the management in engaging stakeholder groups.

“We have a proactive stakeholder relationship management system and strong relationships with various pension unions and associations to facilitate open communication, dialogue as well as faster issue resolution.”

“We have established a call centre, a walk-in reception area within the office for pensioners, complaints management system integrated into all pension departments for tracking complaints and facilitating faster resolution.”

Other innovations listed by the Ag. DG include call centre with a Toll-Free number 0800 Call PTAD (0800- 22557823) for open communication channels with pensioners; establishment of state offices to save pensioners from traveling to Abuja to resolve complaints, a complaints management system integrated into all pension departments, customized biometric verification to clean up the flawed pensioners’ that was inherited and a secure, encrypted database of all pensioners details.

The retreat, which held from July 26th to July 28th, 2016, at the Oriental Hotel, Victoria Island Lagos, had in attendance the Chairman of the Senate Committee on Establishment and Public Service, Senator Emmanuel Paulker, and other Distinguished Senators and members of the committee, Pension Administrators, Captains of Industries and other invited guests.